In the city of Baltimore USA, there’s a lively section of the waterfront called Fells Point that houses a pub called The Horse You Came In On Saloon. 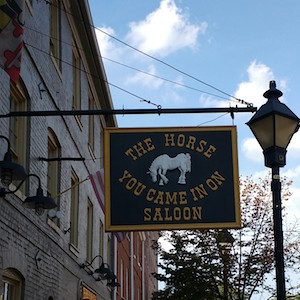 It’s been around since 1775 (originally known as The Horse) and has never closed, even during Prohibition, it’s claimed. The jumping joint

plays a different kind of music in each of its several rooms. Choose 1980s rock, or rap, or oldies. Some recorded and some live. But that’s not the only reason to go there. The food is great, the beer conversational, and they’re famous for their takes on Jack Daniels. But that’s still not a good enough reason to go there.

Here’s the best reason: this was the last watering hole of Edgar Allan Poe—the grandmaster of suspense. 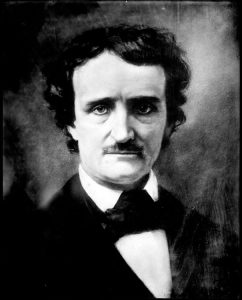 The guy who invented the detective story in 1841 with The Murders in the Rue Morgue; the guy who wrote a whole clutch of gothic horror shorts, including The Fall of the House of Usher which scared the crap out of me as kid; the guy who sold his rights to the wildly popular poem, The Raven, for NINE BUCKS and never made much money anyway; and the guy whose name lives on in the Edgar Awards issued by the Mystery Writers of America.

His death was as weird as his tales. In 1849 Edgar left his home in Richmond Virginia to travel to New York, they say. And disappeared for a week. Turned up in this joint, drank himself stupid and stumbled out into the night. He was found the next day wandering delirious and shouty. I had friends like this many years ago.  Poe was rushed to Washington Medical College where he died soon after without revealing what had happened to him, or where he’d been the past week. He was 40 years old.

When his wife arrived, she declared he was wearing somebody else’s clothes. No explanation was forthcoming. Later, all Poe’s medical records, including his death certificate, vanished. More mystery.

Even this pub, Edgar’s personal Last Chance Saloon, has unexplained moments everybody attributes to him. Lights flicking on and off, cash registers flying open without warning, and once, the heavy door of the safe swung open by itself.

Why wouldn’t it? Edgar always lacked ready cash, after all.