Here’s a useful tip if you’re writing a novel. Make sure you have the ending worked out before you complete the beginning. I didn’t, which is why The Backward Time Traveler took ten years, and a dozen drafts, to write.

However, it’s now available on Amazon Kindle. The Backward Time Traveler is a prequel to my other two novels: The Art of Dash and The Upside of Death. It was supposed to be the first in the series, but its long gestation period changed everything.

There’s an Amazon freebie promotion on September 30 and October 1 (USA time); which means the book is a free download on those days, (no hidden tricks). This is a transparent attempt to gather reviews and kick start the sales process. Without reviews, books languish at the bottom of search engines for several eternities. 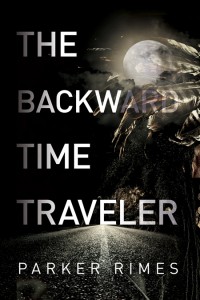 Keera Miles, a psychic, is asked by her spirit guide Bardo to astral travel back 200 years, to rescue a sacred stone from a Native American tribe before it’s lost forever.

She teams up with an annoying, cynical reporter Zach Bones from the Chicago Post. He doesn’t believe her story, but desperate for a temporary hideout from a vicious loan shark, he agrees to join her.

Zach’s also hoping for closer moments with her. Many of them–as many as possible.

When he wakes up in the body of a Sioux brave, he’s bewildered to the point of madness.   Worse, he becomes an unlikely hero during a Crow raid. Equally nerve-wracking for Keera, the camp’s best warrior demands that she be his wife.

The ingenious, twisty plot throws them into their worst conflict with the malevolent Red Leaf, a healer who holds the stone, and its secret.

And he can’t be killed off. Not ever.