I’ve never considered reincarnation as a viable plan for life, despite it being a fundamental tenet of Buddhism, Hinduism and, for its first 500 years, Christianity.

It made no logical sense.  Most people’s recollection of previous lives could be dismissed as genetic memory rather than their own. There was no body of authoritative data, only collections of wispy anecdotes, nor was there any science to make it even half-believable.

First, science changed. Sir Roger Penrose is one of the top 100 scientists in the last century and shares two awards with Stephen Hawking as well as another dozen of his own. These days, he explores human consciousness, defined as the ability to gather information.

He argues that for consciousness to exist now, it had to start with the Big Bang. It existed before physical bodies came into being, and therefore is not bound to our bodies. Penrose is not alone in thinking this; many other cosmologists believe the Universe itself is conscious.

If consciousness doesn’t need a body, then we have a basis for a scientific explanation of near-death-experiences, other out-of-the-body moments, and maybe even, reincarnation.

So why would we bother with a physical return? I found a possible answer in this book: Journey of Souls by Michael Newton. 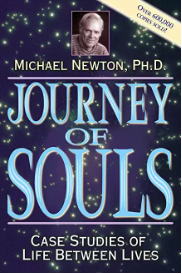 Newton was a hypnotherapist who regressed patients who came to him with pains that no medical doctor could diagnose. He would regress them and discover a childhood accident the patient had forgotten about, but the body hadn’t. The simple act of remembering the event cured many patients.

One day, during hypnotic regression, a patient told of a different life. He described being bayoneted to death as a soldier in the Somme in the first world war. His story checked out. Newton, astounded, switched to exploring other patient’s past lives.

His technique was simple. “Tell me what happened when you last died,” he’d ask a patient under hypnosis. The gates of the subconscious were thrown open, and the most riveting accounts emerged.

They told of meetings with previously deceased loved ones (aww), being taken before a Council of Elders who checked if they had achieved their objectives on Earth (uh oh…), and much hanging out with like-minded souls (great!). Then they did it again.  And again. A thousand times, if they wanted to.

And their reason for reincarnation? To gain total enlightenment, reunite with our Creator, and be as one with the Universe.